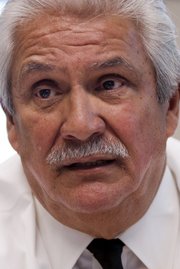 Is it me, or have you noticed that often the difference between the crooks and the cops is the badge? Not to say that there aren’t some good folks in law enforcement but there are some bad apples too. One such apple that I have crosses political swords with before is current Yolo County Sheriff Ed Prieto.

Prior to his gig as Sheriff, Ed used to work for the California Highway Patrol. He was an instructor at the CHP Academy in West Sacramento. During his time as an instructor, he was able to screen female recruits and upgrade to a new wife.

Ed is not the only CHP instructor that I am acquainted with to trade a ring for a fling. Our society has a term for people like Ed that use their position as a supervisor to get sexual favors from those under them.

Anyway, after the Academy, Ed decided to run for sheriff in Yolo County. As a result, his first political fundraiser was in Los Angeles. No joke, I think I still have the campaign finance reports. I remember because one of his first contributions was from an abortion clinic in East Los Angeles. Why a sheriff candidate would accept money from anybody living over 400 miles away is peculiar but what nexus is there between abortions in East Los Angeles and a rural law enforcement guy? (I will let the reader speculate any possible connection.)

Ed and I had a talk at the Yolo County Fair the summer he first campaigned. He was staunchly defending Bill Clinton as news of Monica’s famous blue dress was helping to inject “a Lewinsky” into the public lexicon. Being of a similar background to the President, I understood his desire to defend Clinton.

With the Democrat machine in Davis backing him, Ed won the election and has been sheriff ever since.

Ed has a documented track record of being morally challenged so it was no surprise that he has been hit with three harassment lawsuit in two years. What is surprising is that it is his employees, the sheriff deputies that are having issues with him.

Robin Gonzalez claims in a federal lawsuit filed Wednesday that the blatant conduct has continued for almost her entire 11 years under Prieto’s command.

The uninvited and unwanted attention has included hugging and kissing her, cradling her buttocks in his hands, pinching other parts of her body, lewd stares, repeated observations regarding her appearance and weight, and remarks laced with sexual innuendo, according to Gonzalez.

At one point, Gonzalez states in the civil rights suit, Prieto told her she could continue in her position as an investigator if she performed oral sex on him.
female deputy’s suit accuses yolo

Victoria Zetwick, a corrections sergeant and veteran of 24 years in the Sheriff’s Department, alleges that Prieto embraced and kissed her more than 100 times in the 14 years since he became sheriff.

“Each time was awkward, unsolicited and unwelcome,” the suit states, adding later that Prieto acted with “impunity and increasing boldness” and was unfit to serve as sheriff.
Deputy Files Suit

Deputy Darrel Johnson told KCRA that during a meeting with a number of deputies and other high-ranking officials in the Yolo County Sheriff’s Department in September of 2011, the Sheriff singled him out using possibly racially inflammatory names such as “gravy” and “dark one.”

Deputy Johnson, who turns 43 next week, is a 14-year veteran peace office who has served the past seven years as a sheriff’s deputy with the Yolo County Sheriff’s Department where he is currently employed.
deputy-files-suit-against-sheriff-prieto-alleging-racially-insensitve-names-and-hostile-work-environment

Being a Democrat officeholder in California clearly insulates officials from the rules that the rest of us are expected to follow. Prieto is unfit to be Yolo Sheriff. His justification is that he has behaved this way his whole law enforcement career so why should he change now? I hope he resigns and get out of law enforcement, but I suspect that he will cling to power until it is taken from him. At best, perhaps he will decide not to run for re-election.

On the other hand, with all this publicity, perhaps Ed could get employment as a TSA screener. He certainly has a feel for the job.

Commentary: Is There a Problem at the Sheriff’s Department?