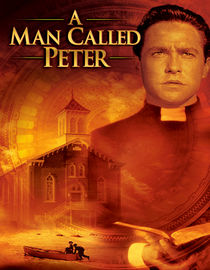 I rarely do movie reviews on this blog but last night I saw a movie worth writing about. It does not have the action of The Avengers or the special effects of Prometheus but the story in this movie was better than either film. Last night I watched a film on Netflix titled A Man Called Peter. The movie had been sitting in our instant cue for the better part of a year but last night my seven year old son asked to see it. The synopsis of the film is:

Based on a true story, this drama centers on young Scotsman Peter Marshall, who travels to America and becomes pastor of the Church of the Presidents in Washington, D.C., on his way to becoming chaplain of the U.S. Senate.

Peter Marshall was a Presbyterian minister with a gift of communicating his faith in a way that could be understood by the simple and the learned. Much of the film gives you a feel for the type of man that could go from such humble beginnings to the seat of power in a short period of time. Much of the movie covers the period of the Great Depression and World War II.

If you want to know why the people of this period were called the Greatest Generation, this film will give you the answer. This film touches on many themes that are still plaguing our culture today. It has the best rebuttal of feminism that I have ever encountered and the movie was made in 1955. Marriage and family are spoken of at length as is the subject of death. The film’s depictions of the events of December 7, 1941 are haunting and very memorable. In a sense, the timeline of the movie revolves around the events on this date.

Toward the end of the film, Marshall is made the Chaplin of the U.S. Senate. As I heard Marshall’s prayers for the beginning of each day in the U.S. Senate, I thought that here was a clergyman that even humorist Will Rogers would agree had the correct view of the Congress and partisan politics.

Peter Marshall is played by Irish actor Richard Todd. Todd was a very prolific actor in the 1950s. His bio on Wikipedia reads in part,

He later appeared in The Dam Busters (1955) as Wing Commander Guy Gibson. Americans remember Todd for his role as the United States Senate Chaplain Peter Marshall in the film version of Catherine Marshall’s best selling biography, A Man Called Peter and as Robin Hood in the 1952 Disney film The Story of Robin Hood and His Merrie Men. Todd was the first choice of author Ian Fleming to play James Bond in Dr. No, but a scheduling conflict gave the role to Sean Connery.

Wife Catherine Marshall is played by actress Jean Peters. Peters starred in movies with Marilyn Monroe, Clifton Webb and other top stars in Hollywood during the 1950s. Amazingly, her last film was A Man Called Peter. She then married billionaire Howard Hughes and stopped acting until the 1970s. Her last roll was on an episode of the television series Murder, She Wrote.

This film was nominated for an Oscar. It is great for the whole family and has a message that families need to hear.