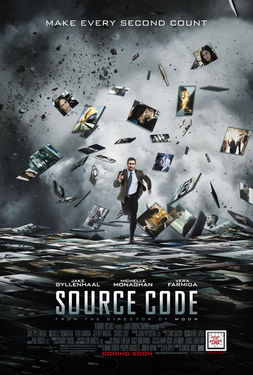 After all the nonsense with the CRA this past week, I grabbed the middle child and went to the movies on Saturday. Partially based on reviews and on the movie description, I chose to give Source Code a try. On Fandango it was rated with a reviewer score of 74. This was much higher that some of the other films that I pondered. The film description on fandango reads:

When decorated soldier Captain Colter Stevens (Jake Gyllenhaal) wakes up in the body of an unknown man, he discovers he’s part of a mission to find the bomber of a Chicago commuter train. In an assignment unlike any he’s ever known, he learns he’s part of a government experiment called the “Source Code,” a program that enables him to cross over into another man’s identity in the last 8 minutes of his life. With a second, much larger target threatening to kill millions in downtown Chicago, Colter re-lives the incident over and over again, gathering clues each time, until he can solve the mystery of who is behind the bombs and prevent the next attack.

The premise could be compared to a mash-up of Groundhog Day, 7 Days and Quantum Leap. As the main character keeps living the event over and over again, he begins to take unconventional approaches to solving the challenge before him. He even gets to know many of the people on the train with him.

As the movie progresses you get a glimpse of the larger world that is impacted by the terror attack on the train. The main character learns how he was chosen to be part of the Source Code project. He also comes up with some creative ways of testing the limits of his eight minute time loop. The movie ending is satisfying. I won’t give it away, but it’s worth a look even at full price.