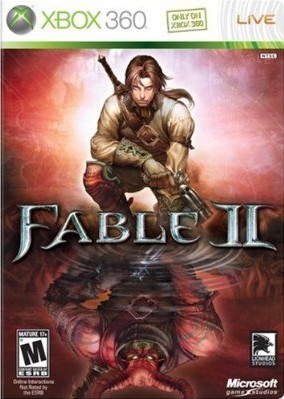 Fable II has been a long time in coming. It has several improvements over the original since this one was written to run on the XBOX 360. The world of Fable looks great in HD. The interface is easy to use and combat is a cinch. Your character can be male or female. If you have a second controller, you can press the start button and get a “henchman” to fight with you. Don’t share gold or points with this character, it seems like a waste to me since he starts with all spells and skills that you already have.

Buying houses to rent out is a great idea in the game. The dog is a fun and original companion. It is the best part of the game. The dog often needs healing but it does some fighting with you and is great at finding quest items and buried treasure. Ranged weapons include bows and firearms both pistols and rifles.

The Mature rating for the game is not from violence but the potential sexual content of the game. In theory, you can have sexual relations with most other characters in the game. Some stores sell condoms so you also get your choice of “protected” or “unprotected” sex. Both children and sexually transmitted diseases (STDs) can result from these relationships. For those unfamiliar with the game, they don’t actually show anything, the screen goes completely black, plays a few sound effects and then you’re done. Those interested in you will develop hearts over their heads. Some characters, especially later in the game, will outright proposition you. Ladies of ill repute are dressed accordingly and easy to find in one town especially. Having multiple families is possible but not encouraged.

Warning: Spoilers ahead!
The story is very similar to the original but set 500 years after the original Fable game. First you start in childhood. Then you jump to being an adult. After several hours of adventures you end up in captivity for ten years! Then you are released and adventure some more. The confrontation with the bad guy is anticlimactic. You end-up being shot by him again and wake-up in the Perfect World with your sister. As you go to bed, you hear music, if you don’t go looking for the music box you stay in “groundhog day” to do it again. Once you find the music box you come face-to-face with the bad guy one last time. Simply play the music box and he is defeated. It’s a far cry from fighting Jack of Blades in the first game.

There are two odd quests in the game. The first quest is required to complete the main story. At one point you must sacrifice either a girl or yourself to these evil shadow guys. If you sacrifice yourself, you end-up with evil looking red eyes and age significantly. Self sacrifice however is an act of good, so why red eyes? The second quest is optional and very weird (twisted). You are asked to dig up the body parts of Lady Grey 500 years after she was purposely dismembered. The grave keeper wants to reanimate her because he is in love with her. Just like Frankenstein, lightning brings Lady Grey back to life along with an added love spell. You now get to decide to let her fall in love with you (the first person she sees after her resurrection) or you need to run like hell to escape her amorous intentions. You have 45 seconds to decide. I found the whole thing creepy and unsettling.

Fable II is an entertaining and fun game to play but it is definitely inappropriate for younger gamers.