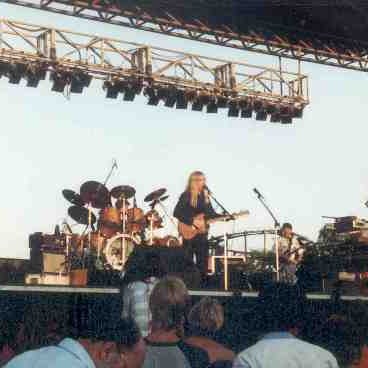 I just read on WorldNetDaily that Larry Norman had died. I will miss Larry and wanted to reflect on his music and influence on my life.

In the mid 1970’s, I made my peace with God. I had been looking hard for Him in fifth and sixth grade. I went from being a “good Catholic boy” to an agnostic and then began reading the Bible. I knew there was more to knowing God than what the nuns at my Catholic school were teaching to me.

At the end of seventh grade, I began attending a Baptist church in the town where I lived. The youth program was full of people with a living faith. They were really a breath of fresh air to my soul. (To this day I still see some of that group from time to time.) At church camp I walked forward and began my walk with Christ. While God has led me in other directions, I have continued to walk with Him.

At the Baptist church youth group we sang many songs each Wednesday night. Unknown to me at the time, Larry Norman had penned at least a third of the songs that we were singing. I remember being terrified by many of the songs and the fervor created by Hal Lindsey and The Late, Great Planet Earth. The church was full of “rapture fever.”

We loved to sing, “Life was filled with guns and war, and everyone got trampled to the floor, I wish we’d all been ready…”

Dispensationalist and Pre-Millennial theology were the tenants of orthodoxy at the church. This was the type of church that defined itself by what its members didn’t do. “I don’t smoke, drink or chew; and I don’t go with girls that do.” Another thing we didn’t do was listening to that “evil” Christian rock n’ roll. As far as I know, no one in the youth program ever mentioned Larry Norman.If the pastor had known, I’m sure there would have been hell to pay.

Norman also helped others to follow his lead in singing for God in a way that was uncompromising. Larry Norman was followed by Keith Green, Randy Stonehill, Michael Omartian, Gary S Paxton and others. These musicians helped to create a market for Christian music with a popular beat.

Larry voiced this idea when he song. “I don’t want any of those funeral marches, I aint dead yet. All I’m really tryin’ to say is why should the devil have all the good music?”

A few years later, I joined the Navy and had a chance to see Larry Norman in concert. I took the photo for this article in the early 1980’s.

Larry Norman had been in poor health for the last several years but is now at rest and with the Jesus that he loved so dearly. Maybe it is time for me to start buying all those Larry Norman CDs that I failed to get for Christmas last year.