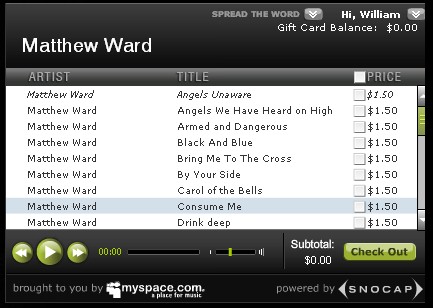 Matthew Ward is best known for his part of the 1970’s trio known as The 2nd Chapter of Acts. The group often toured with Keith Green, Phil Keaggy and Barry McGuire. During his time with 2nd Chapter, Ward released his first solo album, Toward Eternity. Toward Eternity was one of the best Christian rock albums of the period. I have many fond memories of hanging out at the campus radio station play cuts off this LP on Friday nights.

I have been checking periodically for many years to see if Toward Eternity would ever be released on CD. I’m still waiting. On the Matthew Ward website, there is no mention of Toward Eternity on the Store page on his site. However, on the Music page you will find a list of all the solo projects that Matthew Ward has done. On this page is a box that looks like an ad. It lists many songs in alphabetical order. If you play around with this box you will find that it is in fact a way to play and download mp3 files of songs by Matthew Ward.

Songs that have been purchased previously appear in italics. Note that songs are not listed by original LP or CD. By scrolling up and down on the music page you can figure-out which songs belong to which recording. Setting-up an account on Snocap is easy and doesn’t require selecting the songs over again. Be warned that there is no confirmation screen prior to purchasing the songs. Once purchased you need to either install a download manager from Snocap or right-click each song title and select save to download.

Matthew has a great duel on the Donna Summer album She Works Hard for the Money. Look for the track called Love has a Mind of It’s Own. He also has a great duet with Leslie (Sam) Phillips on her Dancing with Danger CD called By My Spirit.

Matthew Ward’s music is a real treasure. I’m glad he has found his way into the digital age.