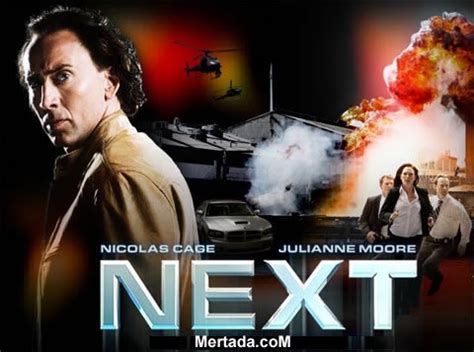 Yet another movie based on a story by Phillip K. Dick. Nicolas Cage stars as a man that can see into the future. The catch, he can only see up to two minutes ahead. The movie is fast paced and action filled. Cage’s character, Cris Johnson, is sought by the FBI to assist them finding a nuclear bomb in southern California. This is a chase movie. If you liked the Fugitive then this movie is worth a look.

The movie is rated PG-13. I think it could have qualified for an R with a little less editing. Because Johnson (Cage) can see into the future, there are lots of “what if” scenes. Many of these are explosions and people getting shot. ** Spoiler alert ** One scene involves his love interest being strapped into a wheelchair wearing a bomb that is exploded by terrorists. This scene is very disturbing. My wife cried. Much of the movie is devoted to preventing this possible future.

Cage is better in this film than in Ghost Rider. He is likable and the opening scenes in the movie create believability in his power that makes the whole premise work. Unlike the television show Heroes, the directors are not trying to misdirect you as each possible future is explored. They simply show you the possible choices and consequences of each. While you are waiting for the lines to Spiderman to get shorter, consider this film to be your Next.