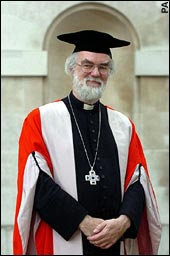 Scott Adams, the father of the Dilbert comic strip, has proposed that there is a right way, a wrong way and the weasel way. The Weasel way has been superseded now by the Anglican way. The Archbishop of Canterbury has thrown in the towel on unity within the Anglican Community and proposed splitting the Church into the Orthodox Historical Anglicans who have a vote in Church matters and the liberals who will be under the umbrella of his authority but be given no vote in matters of Church government. Below is an article from the London Telegraph explaining this idea that is sure to make waves.

Williams sets out his blueprint for twin-track Church

The Archbishop of Canterbury, Dr Rowan Williams, yesterday outlined radical plans that could force the liberal American Church out of mainstream Anglicanism if it refuses to toe the majority line on issues such as homosexuality.

In his most personal and direct statement on the crisis engulfing the worldwide Church, the archbishop made clear that his patience was running out with liberals who defy official policy yet want to stay in the Anglican “club”.

In a six-page “reflection”, Dr Williams set out a blueprint for a “two-track” Communion, with Churches prepared to obey official policy classed as “constituent” members and those who refuse to curb their autonomy being given “aossciate” status.

The “associate” Churches would still be bound by historic links but would not share the same constitutional structures, he suggested.

In a phrase that will alarm liberals, the archbishop said the relationship between the constituent and associate members would be like that between the Church of England and Methodist Church.

“The ‘associated’ Churches would have no direct part in the decision-making of the ‘constituent’ Churches, though they might be observers whose views were sought or whose expertise was shared from time to time, and with whom significant areas of co-operation might be possible,” he said.

The move would effectively create two strands of Anglicanism and would be widely seen as the equivalent of a schism even if no individual provinces are formally expelled.

Allies of the archbishop believe that the plan will ensure that Anglicanism will remain a broad but manageable movement, but critics will fear that he would gain papal-style powers over an inner core of Churches.

The archbishop’s letter to the Church did not address the more immediate fate of the American Episcopal Church, which failed to meet the requests made by him and his fellow primates to halt its liberal agenda at its General Convention in Columbus, Ohio, last week.

Dr Williams is not expected to make a final pronouncement on whether the liberal leadership of the American Church will be invited to the 2008 Lambeth Conference until a meeting of all the primates early next year.

But he will hope to persuade conservatives that expelling the Americans will not be necessary, as the liberals could anyway find themselves on the margins.

Under his long-term plan, first disclosed in The Daily Telegraph last month, all provinces will be given the chance to sign a “covenant”, which will restrain them from acting unilaterally on contentious issues.

Those that did not – up to a third have expressed doubts – would be able to continue pushing through their divisive reforms without destroying the rest of the Church. But they would lose their voting rights at key Anglican summits where policy is decided.

A number of provinces, including the American Episcopal Church and the Anglican Church in Canada, have already made clear that they would be highly unlikely to sign such an agreement.

If the plan is adopted at the next Lambeth Conference, the liberals will be confronted with a choice of whether to join up and lose their much- prized autonomy, or face isolation.

In his reflection to all bishops, clergy and Anglican faithful worldwide, Dr Williams said: “There is no way in which the Anglican Communion can remain unchanged by what is happening at the moment.

“Neither the liberal nor the conservative can simply appeal to a historic identity that doesn’t correspond with where we now are.”

Liberals reacted with fury to the plan, describing it as a mess that would please no one.

Affirming Catholicism, a liberal group of which Dr Williams was a founding member, said that “partition” would not work.