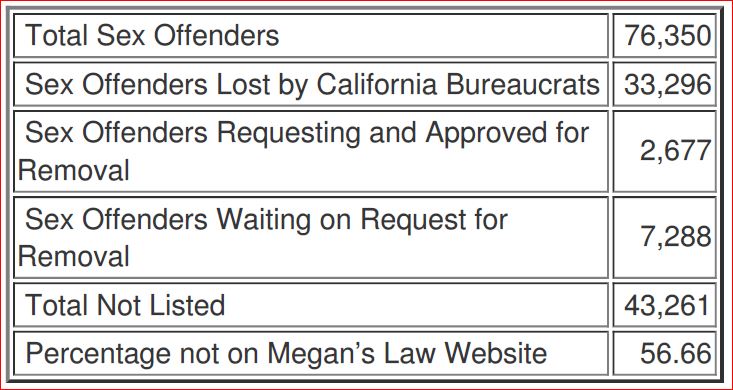 All convicted sex offenders need to do is submit a form to the Attorney General and poof, they come off the list. So far 2,677 have been removed and another 7,288 are waiting for approval. See the article at  KCRA-TV in Sacramento

This is in addition to the sex offenders that the state has lost.

At least 27,577 sex offenders, or 39 percent of the 70,631 ex-cons currently required to register in California, may be “out of compliance,” according to state data provided to the Associated Press. “We don’t know where they are,” acknowledged Margaret Moore, who until recently ran the state’s
sex offender registry in Sacramento.

A closer look at the numbers revealed the department also doesn’t know the whereabouts of another 5,719 offenders who “cannot be accurately categorized.” Many never registered as required after leaving prison, and most have not been heard from since 1995, said Norm Pierce, manager of the Violent Crime Information Center.

All told, California is missing 33,296 offenders, or 44 percent of the 76,350 required to register, according to the data provided to the AP after months of requests.

Let”s do the math. 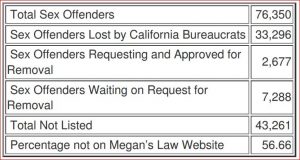