Disney has reported for the last several years problems in its ESPN (Sports Programming) division.
(For low information readers, Disney owns the American Broadcasting Company (ABC) and ESPN is a subsidiary of ABC.)
Much of this stems from the high cost of producing live events and declining subscribership due to cable and satellite cancellations.  Much of the price you pay for subscription television is a subsidy for the minority that watches sports programming. If only those that actually watched ESPN paid for it, their business model would collapse and the entire network would be gone before the end of the month.

X is going to break down why there is an easy answer for their woes and Fox Sports 1’s gain in viewership: politics.

I am not talking about Republican versus Democrat. I am referring to people wanting to watch sports as their way to relax from everything going on in our world.  ESPN—led by John Skipper, and Disney led by Bob Iger—have been forcing their liberal agenda on its viewers for around two years now.  X believes this is a main reason for people to decide to cut the cord with ESPN.  When X tunes into ESPN, he wants to watch Aaron Rodgers throwing touchdown passes, not listen to Caitlyn (Bruce) Jenner get the Arthur Ashe courage award at the ESPY’s, or Colin Kaepernick spew his vile garbage that he calls an opinion.

Colin Kaepernick—the quarterback of the San Francisco 49er—for the last three weeks has not stood during the playing of the national anthem.  Kaepernick claims his reason for dissing his country is due to bodies lying in the streets and rogue cops getting paid while a bogus investigation takes place.  X just about spontaneously combusted when he heard this load of meadow muffins. This is so far from the truth it’s laughable.

You see Kaepernick makes 18 million a year playing football. This amount is more money than an average person—plus one or two generations in their family—will ever earn in their lifetime!  X suggests Kaepernick do something for the communities he feels are oppressed by this “violent policing.”  However therein lies the question that no Black Lives Matter activist wants to answer, they do not want any change.  Sadly ESPN—much like the democrat party—has rushed in to help them out.  Witness Sports Center anchor and resident Braying Shitheel Stan Verrett who went on this rant the following night about Kaepernick, saying …

“I’ve always stood for the anthem because I believe in the promise of America, what the flag is supposed to symbolize even though America often falls short of what it’s supposed to symbolize. I mean, my dad served in the Army, dealt with discrimination in the Army, came back from his service in World War II and was not afforded the same rights as a U.S. citizen after his service, so don’t talk to me about sacrifice and the military. My mom was the valedictorian of her high school, couldn’t go to college in Louisiana and other mainstream universities because they were segregated. They didn’t want to hear about her grades. You can’t go because you’re black.

“There’s still (discriminatory) problems in housing, hiring, the justice system. These are real problems. People aren’t making this up and they’re trying to find ways to speak out about it. You’re not always going to agree with the method. But let’s pay as much attention to the substance as we do to the symbol.”

That’s what you call a Braying Shitheel folks. He speaks about past events thinking they still exist in the present.  I doubt wholeheartedly any Black Valedictorian in high school couldn’t get into the college of his/her choice.  Regarding the completely out of line World War II comment…..Verrett get with the program; many people’s parents/children did not come back from that war or several others before and since.  Verrett and his fellow blowhards at ESPN think they are pushing social justice, but they could not be more wrong.  X does not agree with many aspects of this country’s past nor present doings, such as; war, slavery, Japanese internment camps etc. but he can still see the forest through the trees. So Kaepernick had a postgame press conference and what did he wear for a shirt, see for yourself. 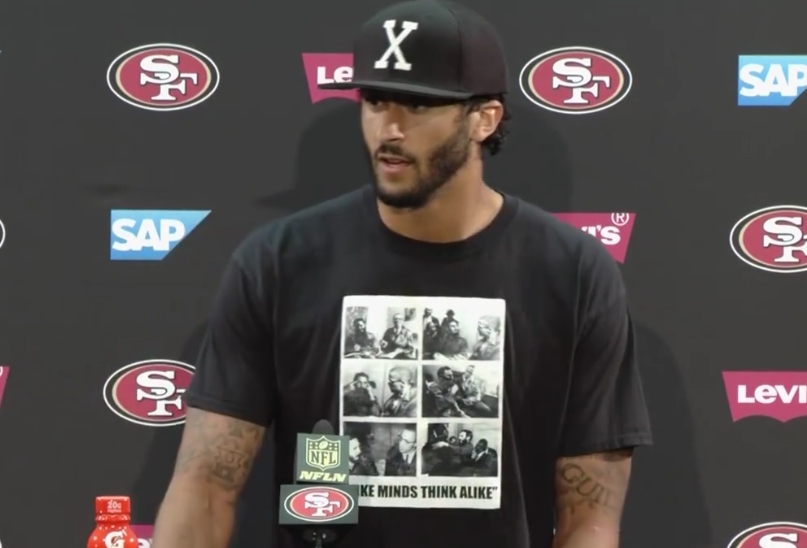 Yes, folks that is a Fidel Castro T-shirt.  Yep THAT FIDEL CASTRO … interesting choice of apparel Kaepernick.  So what say you Stan Verrett?  All of a sudden the cat seems to have got your tongue?  Folks, Kaepernick is a very troubled young man but he is the perfect surrogate speaker for Black Lives Matter, they protest/burn things, and cause so much mayhem that the Allstate Insurance spokesperson is jealous, yet they have no stated goal or outcome they want.  This brings everything back to ESPN. Stan Verrett thinks he is doing right by the black community but in reality he is stirring the racial pot and viewers are fleeing ESPN in droves.

X has some advice for ESPN; namely, stay the BLEEP out of my sports watching experience.  I could not give half a damn about your current tabloidal reporting format, I could care less about whether Caitlyn Jenner (your network hero) stood or sat while using the restroom today, and I really could care less about your views of America, Verrett.  Personally—and this goes for everyone that apparently believes this country is no good—find a country where you have it better, and move there.  I heard North Korea, and some parts of the Middle East are great this time of year, and I’ve heard they love Americans over there.