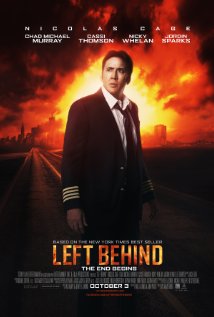 Last night, we watched the 2014 version of “Left Behind” featuring Nicholas Cage. Cage makes no pretense of being a believer but some folks in his family are working on him. These family members are also involved in film and talked him into being in the movie. Cage takes many roles that would be risky for other actors. I commend him for taking the risk. Ghost Rider to Left Behind covers a lot of ground.

In the movie, Cage is an airline pilot on a transcontinental flight from New York to London. About halfway thru the flight, the secret rapture of Christians takes place.

At this point in the film, I stopped it and said to my ten year old son that all the babies will be taken too. Sure enough, when I hit play, viewers learned that along with the Christians some “other sheep” were also taken. I tried to explain that not just the Christian children but all the Jewish, Muslim, Hindu and all the rest were gone too. Per the movie, no children were left on the planet.

I have a real problem with the theology in this film. Both Premillennialism and Dispensationalism have no Biblical warrant and when married together, it results in some crazy theology. I explained to my son that the reason the children were taken is because in Baptist Theology, they have a doctrine called the Age of Accountability.

Instead of baptizing their children, Baptists—and like-minded Protestant folks—have a baby dedication ceremony. They believe until children are old enough to truly understand right from wrong, that they can never choose to believer or reject Christ, therefore they are innocent until reaching this “Age of Accountability”. Oh, this age is arbitrary for each child; for some seven, others ten, and if they are handicapped, maybe never.

So who should I believe? Paul the Apostle or Tim LaHaye, Billy Graham, and the good folks at Dallas Theological Seminary?  Baptists are logically inconsistent on this point.

Do they believe the Scriptures when it says?
• “For all have sinned and fall short of the glory of God”.
• “For all we like sheep have gone astray.”
• “There is none righteous, no not one.”
And other such verses.

Baptists try to simultaneously affirm both positions. Sorry but the Bible knows of no doctrine of the Age of Accountability. The Scripture is clear that Jesus is the Way, the Truth, the Life; no one comes to the Father except by Him.

If all children can go to heaven without going thru Christ—because they are innocent of sin—then why let them grow older and have a possibility of rejecting Christ? Kill them now and insure they do go to Heaven.

I can’t take credit for pointing this problem out but I sure got smacked with it in a very real world way. Here is how it happened.

Back in the day, I used to hang-out with folks involved in a prolife movement called “Operation Rescue.” I met some good people involved in this organization and learned a lot about my faith during this period of my life.

One activity that I went to was a “baby shower” at Gibson Ranch. It just so happened that the local Planned Parenthood group (or other like-minded abortion provider in the area) was having their company picnic at a nearby spot. We all grabbed signs and went over by their activity and began to protest. Seeing our challenge, the people at the picnic came over and exchanged words with us.

One lady and I had an actual discussion in the midst of this. She asked me why I was prolife to which I responded that I wanted to stop babies from being killed. She then asked me if I believed that the aborted babies went to heaven, to which I responded “yes”. Her next inquiry was the very point that I raise in this blog, if these same children were allowed to be born then at least some would grow-up to reject Christ and thus end-up in Hell. Her conclusion was that by aborting the children she was doing them the service of insuring their eternal destiny. I was unprepared to respond to this logic. About all I could say was killing was wrong. It was weak. I had lost.

Thankfully, shortly after this experience, I began a paradigm shift towards Reformed Theology and Postmillennialism. Parting with the Age of Accountability doctrine and embracing a Covenantal understanding of the faith addressed the shortcomings and contradictions that were so painfully illustrated to me by an abortion provider many years ago.

Watching the key moment of Left Behind brought to mind that whole incident. It’s Jesus or Universalism not some crazy cosmic hybrid of both.