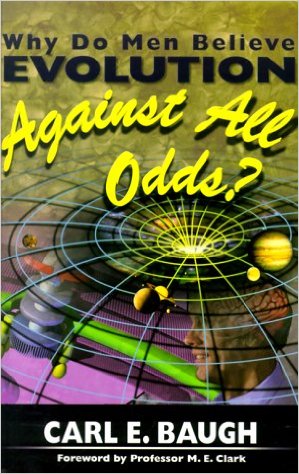 Last night I finished reading “Why Do Men Believe Evolution Against All Odds?” By Carl Baugh. We were given a copy by Mr. Baugh when we visited the Creation Evidence Museum in Glenrose Texas. I think when he heard that we were from California; he had mercy on us and figured that we needed the help.

The book was a quick read. It was well documented and logically organized. I have seen similar works in the past but this one seemed more “modern” since it incorporated a section on biochemistry and the function of cells; something that literally didn’t exist too many years ago. See Darwin’s Black Box by Michael Behe if you want the full explanation of why cellular function disproves evolutionary theory.

My one complaint is that there are several blatant typographical errors in the book. Baugh could use a proofreader before going to press again.

As I prepared to write this blog I took a look at the book on Amazon.com. While Baugh has much praise on the customer reviews of the book, he also has his detractors. The attacks by one reviewer were not on the contents of the book but on the academic credentials claimed by Baugh. On Amazon the author biography reads

Dr. Carl Edward Baugh is founder and director of Creation Evidence Museum, Glen Rose, Texas; scientific research director for world’s first hyperbaric biosphere; scientific research director for water reclamation and energized plant systems; and the discoverer and excavation director of two major dinosaurs: Acrocanthosaurus in Texas and Stegosaurus stenops in Colorado. He holds a degree in theology from Baptist Bible College, a Masters in archaeology, and a Ph.D. in education, both from Pacific College of Graduate Studies.

I tried “Pacific College of Graduate Studies” on both Bing and Google. Surprisingly, this school does not seem to exist. However, I did get a hit on Carl Baugh.

A Matter of Degree: An Examination of Carl Baugh’s Alleged Credentials http://paleo.cc/paluxy/degrees.htm

This article by Glen Kuban eviscerates Baugh’s claims of holding a doctorate from an accredited institution of higher learning. Interestingly, Baugh’s biography on the Creation Evidence Museum makes no claims that he is a doctor. Accreditation is not the be all and end all of higher learning but it does limit where and how the claim of a degree can be used.

I know from personal experience that Texas has an extremely high bar for any college to be accredited. The library requirement alone is ridiculous. (At least 70,000 volumes and fulltime librarian) A decade or so ago, my church moved their Seminary from Louisiana to Texas. To get accredited in Texas would have bankrupted the denomination. Instead they made an arrangement with a college in England to grant some type of degree for theological studies.

I can see that Baugh or any other creationist might have trouble getting a scientific degree from a typical college. Even Baylor—to their shame—will run you off if you believe in a literal six-day creation…at least from their faculty.

Kuban, however, accuses Baugh of granting himself his degree. It’s an interesting read. What caught my attention was the footnote #40. According to the footnote, Answers in Genesis has tried to put some distance between themselves and Baugh. The URL in Kuban’s article was no good but I went to Ken Ham’s website and found this:
AIG discounts the claims that human footprints were found with dinosaurs at Glenrose. They say that it might be true but …

Given the ambiguity of the evidence and the fact that much of what may have once been present is no longer available for study, we do not believe those claims of coexisting human and dinosaur prints are wholly supportable. Dr. John Morris in 1986 reported similar conclusions, deciding “it would now be improper for creationists to continue to use the Paluxy data as evidence against evolution” unless further research brings new facts to light.
paluxy-river-tracks-in-texas-spotlight

I know that these claims pre-date Carl Baugh by several decades. Morris and Whitcomb cite them in Genesis Flood (1961).

While not on AIG website, I did a search on the article mentioned in footnote #40 and found this:

CSF does not defend Carl Baugh or his claims in regard to his qualifications. We do not regard Baugh as representative in any way of the mainstream creation movement.
plimer-book-our-point-by-point-rebuttal p. 145

My conclusion is that Carl Baugh does seem to have overstated his resume. I don’t rely on him for validating my beliefs in creation.

The artifacts that he has at his museum are persuasive. However, I think the Torah display and model of Noah’s Ark are unnecessary. The movie on how The Flood occurred and what brought it about is speculative and I would like more information before I’m ready to support Baugh’s whole framework.

As for his book on “Why Do Men Believe Evolution Against All Odds?” I think he nailed it. All Baugh does is introduce quotes from evolutionists that point out flaws in their theory.

The only thing Baugh lacks is Ben Stein’s interview of Richard Dawkins in Expelled, where Dawkins says life on earth came from extraterrestrials that seeded the planet.

Evolution is not a science issue, it’s a spiritual one.