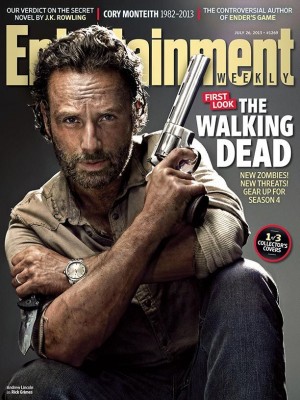 This week-end marks the season three finally of The Walking Dead. The war with Woodberry appears about to explode. In the previews, you can see a guard tower at the prison explode so it looks like the Governor and company will attack.

Based on what I think I know, this is what I will look for on Sunday night:
• The contract with the small town where AMC is filming the Woodberry portion of the series was a two year deal, thus I think the Woodberry story line will not wrap-up until next season.
• Daryl will be out for payback after last week’s episode. Will he act like a berserker and shoot everything that he sees (most likely) or be like a sniper, waiting for a kill shot?
• The actor that play Rick reportedly said 27 will perish in the finally.
• The “Rick is crazy” story needs to fade away.
• Baby—reportedly, the baby did not live in the comic so I think she will stay with someone in Woodberry once the Governor is dispatched. Even in this show, I don’t think they will kill an infant. Typically babies are written out of story when not needed on a television show.
• One of the following will perish—Hershel, Maggie or Glen. Glen proposed to Maggie and her dad approved. They would not show this if it did not matter.
• Andrea will meet her end.
• The Governor’s helper will betray him and then perish.
• Rick’s son will kill someone in a cold and ruthless way.

How the Governor should be killed-off:
My idea is that he will lose his other eye and then be surrounded by walkers. The camera will pan back for a wider shot and fade to back as he screams.

Update 04-02-2013
I made ten comments/predictions on the finally of The Walking Dead Season 3. So how did I do?
• Correct I said that the Governor & company would attack the prison.
• Wrong I said the town of Woodberry would continue into next season—not known but I’m thinking I was wrong on this one.
• Wrong Daryl did almost nothing in the episode so I was wrong about him.
• Correct Rick rumor of 27 dead was right-why was a surprise twist.
• Correct It looks like “Rick is Crazy” was put to rest.
• Wrong Baby not living happily ever after in Woodberry
• Wrong Hershel, Maggie and Glen live into next season?
• Correct Andrea is gone-right big-time
• Correct Governor’s helper is gone
• Correct Rick’s son kills someone in cold and ruthless way

Six correct is not bad for 46 minutes of television.

I wonder if the Governor will be back… New season, new show runner in October