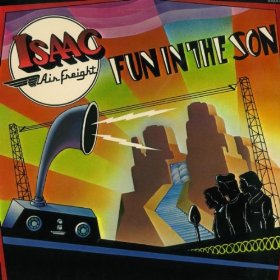 his is a review that I wrote for Amazon.com. I’m glad this classic LP is finally available as an mp3 download.

Isaac Air Freight is a trio of funny guys that features the talents of Dan Rupple, Dave Toole and Larry Watt. Watt left after this LP was released. He was replaced by Mitch Teemley. Isaac Air Freight was a group that performed comedy in churches and Christian music festivals. Mostly their material consisted parodies of Bible stories and various contemporary pop-culture icons.

Fun in the Son was originally released in 1978 by Maranatha. At the time Maranatha was home to Daniel Amos, Parable, Sweet Comfort Band and many other cutting edge contemporary Christian groups. I never recall seeing Fun in the Son released on CD; however, portions were available on a three CD set from an online source.

To understand some of the context of the first two albums you need to remember the influence that Hal Lindsey’s Late Great Planet Earth had on the evangelical community of the 1970’s. Rapture fever was rampant in many circles. America was experiencing the malaise of the Carter administration with double digit inflation and gasoline lines. Paul Ehrlich’s Population Bomb was believed by many to be fact. Many Americans were convinced that “The End” was near. Against this backdrop, Isaac Air Freight was launched to provide a vehicle for Christians to bring the gospel to a generation that was literally abandoning the faith of their fathers and seeking after other gods.

“Let’s Trade Your Salvation” is a full-on parody of the popular TV game show “Let’s Make a Deal” It features the contestant Buck Weaser—a recurring character on the album—wheeling and dealing with host Monty Lucifer for his salvation. This is one of Isaac Air Freight’s best skits ever.

“Religion Store” is the first of several parodies on cults that were released on their various albums. 1978 is the year when Jim Jones had his Kool-Aid laced mass-suicide. Cults and drugs were the major worries of parents during this era.

“Bible Junkie” is a monologue by a young man that comes clean about his addiction to “The Word.” This clever segment uses many terms used at the time by heroin addicts that are applied to a man that is zealous about his relationship with God. It concludes with, “I’m hooked; but I’m hooked on the real thing.”

The concluding skit is “Jerusalem Dragnet.” This is one of the best parodies of Jack Webb’s “Dragnet” that I have ever heard. It is the story of the arrest and crucifixion of Jesus from the point of view of sergeant Friday and his partner. Judas betrays Jesus for bowling money. Peter denied Jesus three times and then the rooster crows. This parody was so popular that “Jerusalem Dragnet II” was released a few albums later. There are a few very inside references that you may not get without explanation. The music playing on the stereo is “Peter, James, and John” by Parable—another Maranatha band. You will also hear music artist Malcolm doing a “walk-on” looking for Alwyn.

“The Last World Series Report” has some memorable lines. “I still remember that great game Daniel had some years back against the Lions. Shut `em out as I recall.”

“Crazy Christians” and “Rapture Airlines” are the first of many fake commercials that Isaac Air Freight did over their many LPs.

This is a great album and I’m glad to see it on Amazon for downloading. Now I have one less reason to buy a USB turntable.