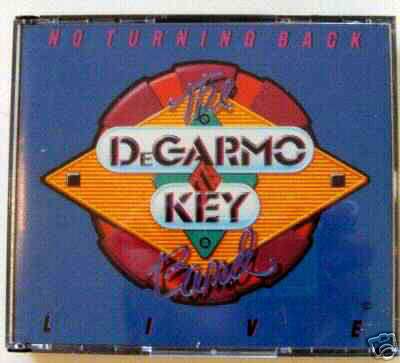 DeGarmo and Key Band made a live album back in about 1981. It was called No Turning Back. It was originally released as a double LP and later as a double CD. Some songs on the album were never released on any other recordings. Needless to say the CDs are out of print.

I happen to own a copy of the CDs. However my disc 2 is defective. There was a period of time shortly after CDs first came out that defective media was mass-produced and sold. The media layers inside the CD will breakdown and render the CD useless. This is apparently what happened to my disc.

I have been watching E-Bay for copies of the CD but to going rate is close to $100. There are two albums by DeGarmo and Key that are not widely available as downloads on places like I-Tunes. This recording is one; the other is their album This Ain’t Hollywood.

I found a link at Sparrow Records that had said that the following titles were available for download. One of the albums listed was No Turning Back. Wow! I might be able to replace my bad disc via a music download. Fantastic!

I checked the four websites referenced at the Sparrow site. This is rather cumbersome because several require proprietary software to be downloaded to even view their sites. As it turns out, only one site actually had the elusive album for download. That site was Connect which is affiliated with Sony. I hesitated somewhat at the name of Sony. Why? Because of their recent reputation of installing spyware as part of their music licensing agreement.

My desire for this music outweighed my concern that this corporation is watching me. My other concern is the proprietary format that you must purchase the music in. (I’ll have more to say about this shortly.)

Once the software was downloaded, installed and my computer did the obligatory restart, I went to the site and created my account and purchased the music; 19 tracks for 9.99. I downloaded the songs to my computer and then said to myself, “hello old friends.” I hit the play button to enjoy some songs that I hadn’t heard in ten or more years and then it hit me: these aren’t right! Songs 1-7 were actually duplicates of 13-19. Tracks 1-7 were the correct names but wrong data files. Look at the time duration of the songs. The song order of the actual download is different from the album. Hey guys this is a live album. The order matters too.

The good news for me is that I did get all the tracks to rebuild my disc 2. Unfortunately, I didn’t get what I thought I was paying to download. I sent an e-mail to the company. I’m curious what type of response that I get from a large corporation about a rather obscure download on their site.

In addition to the tracks being hosed-up, one of the tracks that I downloaded that was labeled correctly has audio gaps about two-thirds of the way through the song. I tried downloading the track again on a different computer and have the same error at the same spot. Therefore their master is bad. I wonder if they ripped the song from the CD release and had a defective disc 2.

I was concerned about using music that was in a proprietary format. I created a CD from the software that I had download for the Connect music site and then ripped the CD in Windows Media format on my home computer. I labeled the tracks and now can use the files like any other music files on my computer. There does not appear to be any copy protection on the files in Windows Media format.