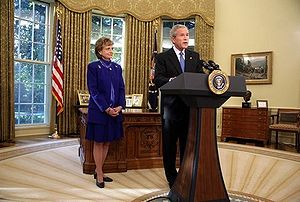 There has always been a coalition that makes-up the Conservatives within the Republican Party. On one end are the religious Conservatives whose primary interest is to reign-in the assault on traditional faith and morality and on the other end are those whose primary concerns are fiscal Conservatism. These folks have advocated less government and lower taxes.

Since Ronald Reagan was president, both of these groups and those who cling to one degree or another to both viewpoints have been moving in the same direction. However, this single nomination by President Bush has broken these groups into their component pieces. Frankly, this is a fascinating to watch.

The Democrats have dutifully circled the wagons and braced for major combat but they can’t decide what their target should be. They are furiously spinning in circles waiting for orders from their special interest groups. The Democrats are willing to fight any nominee because their side needs the fundraising opportunity that a Supreme Court vacancy can generate.

Both sides want a knockdown, drag-out fight to vanquish their enemies in the public arena. This fight would be the political spectacle of the 21st Century. The stakes are for the heart and soul of the Republic. The outcome would be the fourth Constitutional period of our country. (1789 to Civil War; then Civil War to New Deal, then New Deal to Bush Court.)

Instead, President Bush has taken a page from Bill Clinton and triangulated a third option. Not since Solomon decreed that each mother should get half of the baby has something so out of the box of conventional wisdom been tried. Look at the early results. We know from the public record that Harriet Miers is a church going lawyer that has a unique skill set to offer to the position. She teaches Sunday school at a conservative church where she has attended since becoming a born again Christian about 25 years ago. She has managed a law firm of 400 partners—getting that many lawyers to agree is a really big deal. She also has had her turn in trail settings. Plus she has been with George Bush for many years.

Don’t you wonder why the Religious Right is giving each other high fives for this nomination? There is a private record that will never see the light of day but some on the Christian Right have dropped enough hints to read between the lines. There are code words from these pundits that hint at why they are really upbeat. My conclusion after hearing several of the folks in this camp interviewed is that Harriet Miers will be very pro-life, supportive of traditional marriage, and a solid conservative. She may end-up as one of the most conservative jurists on the Court.

The fiscally Conservative folks in the Republican ranks are clueless about these hints that have been offered for our comfort. Since the whole Christian thing is not as important to them, they miss the subtlety of this pick. They want raw meat in the public square and not Bush’s political triangulation. They are not happy. A polite “trust me” from the President is of little comfort to them.

Since almost anything would be an upgrade from the disappointing legacy of Sandra Day O’Connor, they might not opposed Miers but there is no enthusiasm for this pick.

The Democrats are just beginning to realize that Bush skunked them really good with this pick. Again they have no paper trail to use against the nominee. No paper trail means that it will be difficult to mount a unified opposition and there is nothing for their interest groups to use for fundraising except that she is a Christian. Bashing Miers on that score will cause the Democrats to risk dividing their own people. They will lose many—especially the racial minorities —if they push religion too hard. Plus they risk confronting the Constitutional prohibition on test oaths. Not that they care much for the Constitution but this is new ground to desecrate even for them. They still have an institutional memory of JFK and the Catholic issue. They can’t afford to loose the gray-haired New Deal Democrats in the rest homes.

Worse news for the Democrats will be that both of these confirmations (Roberts & Miers) will force them to concede that they are in the minority for the foreseeable future. All they had left was the threat of the filibuster and Bush has found a strategy to take that from them. He turned their tactic for getting Clinton’s judges back on them; “I sorry but that case might come before the Court so I can’t answer that question.”

The next vacancy will occur after the 2006 elections if the nine in black robes (weren’t they the bad guys in Lord of the Rings-fallen greedy kings of men) remain in good health. Why because the Republicans will pickup two or three seats in the Senate and the liberal Northeastern Republicans will cease to be the power brokers (spoilers) in the Senate. At that point it will be game over for the Democrats and then a justice or two will throw in the towel and retire. Bush could
end-up with four picks before the end of his second term.

Yeah, I want “red meat” in the public square too but this might be a far sighted gamble with a better payoff at the end.

They say the Lord works in mysterious ways, well folks this is one of those instances